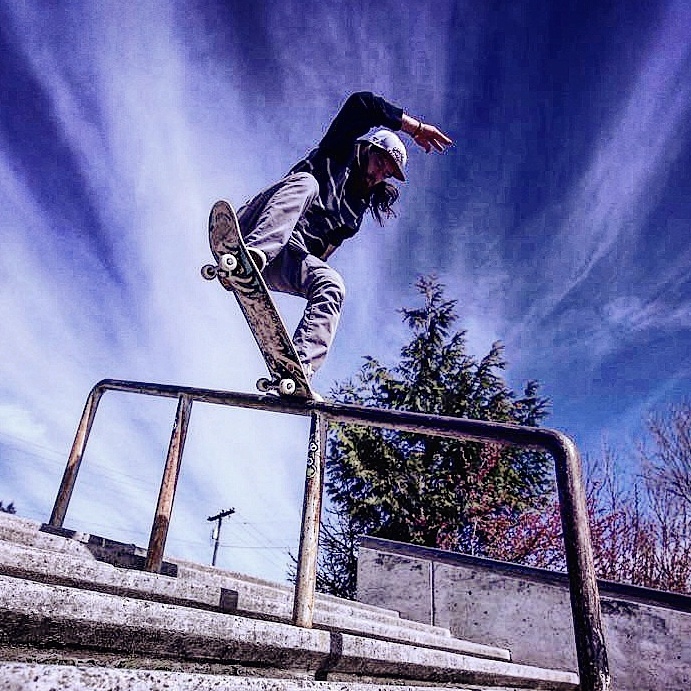 Between the newfound creativity attributed to cannabis, the medical value of the herb and the social interactions that come with the stoner lifestyle, it’s something skaters are seeing the benefit of.

Let’s begin with a little bit of background. I have been skateboarding since I was five years old. I can still remember that infamous Christmas morning that began it all. I picked up that X-Games brand, Fred Meyer-bought skateboard, and instantly felt ten times cooler. I spent every sunny day outside until dark making ramps and rails with whatever garbage I could find around the neighborhood. I loved skateboarding so much that I was welcomed into a crew of older kids who also skated (I was ten years younger than them, but that didn’t seem to matter). I remember them sneaking off only to return with red eyes, smelling funky. After a while, I caught on to the fact that they were smoking weed. This blew me away as I had been raised in a strict religious home and forced to go through the D.A.R.E. program. As far as I knew, weed was a bad drug that turned your brain into scrambled eggs.

Once I was older, I tried cannabis for the first time. WHY HADN’T I DONE THIS SOONER?! After some reflection, I realized that there are 3 main reasons that I use cannabis in conjunction with my skate sessions.

1. Cannabis has a plethora of medical applications
As with any physical sport, skateboarding has many daily pains. If you have a hard skateboard session, you should expect to either go home hurt or at least extremely sore. Before I discovered cannabis, the best thing I could do was go home and take an ice bath, and we all know how much fun those are. Cannabis has opened new pathways for me to recoup and rehab after a long skate session. Of course, most everyone is familiar with the method of smoking cannabis. As far as instant relief goes, this is one of the best methods for pain relief after a bad fall. I also find topicals are helpful for my knees and lower back. Skateboarding involves lifting your own body weight hundreds of times a session and with topicals, I am able to push through a lot of my chronic knee pain caused by almost twenty years of skateboarding abuse. Another method of pain relief is CBD capsules, and/or THC-rich Rick Simpson oils. These are best after the skateboard sessions when you want to feel body pain relief while enjoying a nice rewarding nightcap high.

2. Cannabis is known to stimulate creativity
Skateboarding is a sport that requires the skateboarder to view the world from a different point of view. In the words of skateboard pioneer Craig Stecyk, “Two hundred years of American technology has unwittingly created a massive cement playground of unlimited potential, but it was the minds of eleven year-olds that could see the potential.” Cannabis has been known to put you in a more childlike state, one where you can view the world through a new lens. As a skateboarder, this skill is invaluable. When I look at a stair-set, I may see a new way to go about completing a trick on that particular stair-set. One time, watching a fellow skater, he just stared down a stair-set…then he skated as fast as he could towards the bottom of those stairs. I thought he was crazy, there was no way he was going to be able to jump up the height of 7 stairs. At the last second, he jumped up onto the rail and rode the rail up the stair-set where he landed at the top. Who does that!? Only someone who is thinking outside the box. Creativity is key when it comes to skateboarding, and cannabis is a great way to muster up some inspiration.

3. Cannabis increases camaraderie
Have you ever been out with the boys or girls and you find yourself at the bar after a long sesh? You clink glasses before putting back a few beers? That fellowship time, when you’re hanging out with your skateboard friends, but not actively skateboarding, is the glue that holds the crew together. De-stressing at the end of a skate session is a must and cannabis is a better alternative than going out to the bars. Not only do you get the medicinal benefits (anti-inflammatory properties, dilating blood vessels, stimulating bone growth, protecting damaged brain cells, controlling muscle spasms etc.) but everyone gets to de-stress and relate to each other while consuming a substance that brings together the most unlikely people. Some of my closest friends today are people I met because we shared common ground when it came to our cannabis consumption. Groups that smoke together, stay together.

Cannabis helps me push through my physical pain, but also allows me to think and act more creatively when I am inspecting my surroundings. My skateboarding has been positively impacted by my consumption of cannabis and for those over 21, I recommend checking it out. Roll a joint and grab your board. You won’t regret it…until you fall and in that case, smoke a bowl, ease the pain, and keep on keeping on. As with any substance, partake responsibly and know your limits.

Tweets by @fivezerotrees
Toggle the Widgetbar